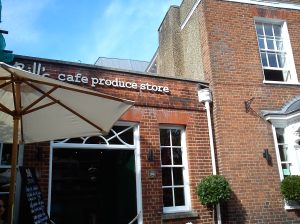 Bill’s Produce Store is a new addition to the Reading café scene and one that I was looking forward to visiting. Mum and I headed there after doing some shopping and we were tired and wanted some tea and a sugar fix. The sun was shining and the outside seating area was full, but luckily someone left just as we were pondering where inside to sit and we snagged a table next to some foliage with a pink spotty sugar bowl.

There was a selection of tea on the menu and Mum picked English Breakfast and I chose Darjeeling. We also decided to share some scones as they were only £3.25 and came with cream and Bill’s strawberry jam. The menu said ‘scones’ – plural – but we were wary as it seemed very cheap for two compared to the other prices on the menu (£5.95 for pudding). We wanted to share, but wanted a whole scone each, so when the waiter came to take the order we double checked that there were two and he assured us this was the case.

The tea arrived in satisfyingly big pots with Twinings labels sticking out the side, but then the scone – singular – arrived. It was cut in half but it was a definite single scone. We complained and were told they would sort us out another one and that the menu would be changed. The second scone arrived – complete with another lot of jam and cream, though there was enough there for two scones anyway, and we tucked in. 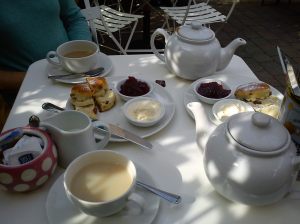 Now, my Mum is a bit healthier than me and didn’t put very much cream on hers. I’m not, so I stuck lots on. It was not clotted cream but had a lighter consistency, which was disappointing but certainly not the first time I’ve been given whipped cream with a scone so I carried on. The scone was warm but doughy and the cream didn’t taste quite right. I scraped most of it off and put more jam on. My Mum, who knows about these things from working in a catering college, said she thought the scone was doughy as it had been reheated in the microwave. I mentioned the cream and we tasted it some more. It wasn’t off, but didn’t taste right, almost soured, I thought it was crème fraiche.

The waiter came back and I complained about the cream, he took it away and then came back with the news that there had been a mistake and it wasn’t cream at all – but mascarpone cheese! He told us that the scones would be complimentary and said he hoped it wasn’t our first time there. When we said it was he said he hoped that we wouldn’t be put off and that we would go back again when they have settled in a bit more. And you know what? The tea came in a pot and the staff were so friendly and helpful about everything, despite the problems, that I will give it one more try. I’ll let you know what happens when I do.

Teapot? Yes.
Leaf tea? No, but Twinings tea bags.
Milk jug? Yes.
Price? £1.75 for a reasonably big pot of tea, £3.25 for a scone with jam and cream.
Cake? Yes and puddings, main meals, breakfasts, evening meals.
Go again? I’ll try once more, as they are very new still and the place had a nice feel to it.