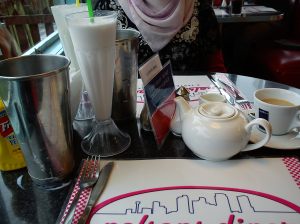 I had been chatting to J about wanting to go somewhere that served milkshakes in those steel tumblers and tall glasses as I always saw them on Neighbours. J said she knew just the place and a few weeks later we were having lunch at the small but perfectly American Nelson’s Diner.

Far too much food at Nelson's Diner.

We had a milkshake each and I also ordered a pot of tea as I wanted to see what it would be like. One of us had a strawberry milkshake and one of us had a ginger one, but I can’t honestly remember who had what. They were both really really good though – thick and in the right tumbler and glass combination. Also extrememly large – enough for two glasses full. Tea came in a pot so that was all okay.

The portions of food were large too and just thinking about the visit makes me feel a bit queasy. I admit that I ate far too much – hot dog and chips and milkshake and tea and pancakes and ice cream. I over indulged and felt sick for the rest of the day, but I would go back – just order less food.