I’m not entirely sure if teacup on thomas street is called ‘teacup on thomas street’ or ‘teacup’, as the website logo seems to think the former but the large sign in the window when I went just said ‘teacup’. Either way, it was a good idea of E’s and a good place to go. It’s not far from the equally lovely North Tea Power, so if you’re going to Manchester then you may as well check out both places.

It seems to be owned by Mr Scruff, who also owns the make us a brew! tea brand, and has an excellent range of tea. It’s also the only place I’ve ever been where your tea is served with an egg timer and an empty teapot. When the tea has reached the right strength (as indicated by the egg timer) then you pour it into the empty pot so it doesn’t get any stronger. When we went it was busy and cheerful and though there weren’t many spare tables we didn’t feel rushed or hurried. It was a very relaxed atmosphere. 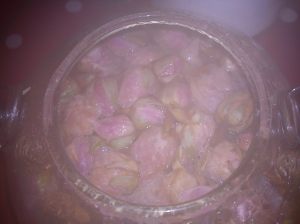 I had the Organic Pink Rose Buds, just because I’d not seen this on a menu before. I’ve had tea with rose petals in, but not one just made of rosebuds. E had the Earl Grey (her first choice was Darjeeling Second Flush but they had run out).

My tea was very light, very soothing and just what I felt like. E said her tea was good tea. I also enjoyed the strange transparent plastic pots and the confusing double cup which meant the area that could hold tea was smaller than the cup and I was in constant danger of pouring hot liquid all over myself. I don’t think this is a negative point of the cafe you understand, it just illustrates my state of mind that day.

The cup of confusion.

We also had some cake.

I have to own up now and confess I’m writing this review almost a month after it took place, work and other things have been so busy this is the first chance I’ve had. I also have to admit that I’d just been to a hen party weekend and was very tired and I did something I never normally do – I forgot to take notes! This means that I remember the cake and I remember it was good, but I don’t remember what it was called. I think mine was banana and walnut and E thinks hers was carrot and orange, but we can’t be sure. You’ll just have to go and try it for yourself!

Teapot? Yes, not just one each, but two each!
Leaf tea? Yup.
Milk jug? Yes.
Price? £3.55 for rosebuds, £3.65 for the Earl Grey, £3 something for each piece of cake.
Cake? Yes, surprisingly filling and solid compared to normal versions of the same cakes, but in a satisfying way.
Go again? Yes.