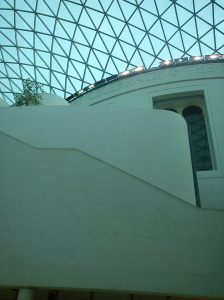 The view from my table looking up - the stairs and glass roof of the Court.

I was early for an appointment and The British Museum was the nearest place I could see that had tea, so that’s where I headed. The central area of the Museum is called the ‘Court’ and the first place that did tea I found was one of the ‘Court Cafes’– according to the receipt it was ‘Court Cafe West’.

The cups were the mandatory cultural cardboard (every cultural institution seems to have these nowadays, e.g. Royal Festival Hall and Kenwood House) and once again I spilt it as I was looking for a table. Yes, I know I had a plastic cover but I didn’t bother to put it on the cup. And so I spilt some.

It was the ‘Drury Lane’ teabags again and I’m not a big fan of the taste of these, they always seem to taste slightly metallic. The Earl Grey I had was okay, it did the job.

Teapot? No.
Leaf tea? No, ‘Drury Lane’ teabag, I had Earl Grey.
Milk jug? A big one that you helped yourself to.
Price? £2 – whatever you type of tea you had.
Cake? Cakes, brownies, pastries, sandwiches, biscuits, cold drinks and jelly beans.
Go again? I will probably end up here again the next time I visit the British Museum, but I will try to seek out a different cafe inside the Museum in the hope that they have teapots. 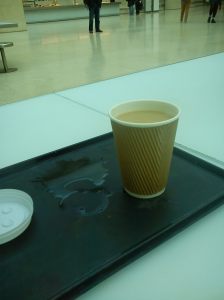 Cultural cardboard at The British Museum.