View of the garden at The Fig Store

Tea and cake and a stripy plate

Tea and cake for all! 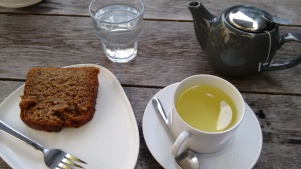 A row of dried plants hanging inside the cafe area

On a beautifully sunny day, six of us went on a trip to Bath. We found one great yarn shop by accident (wool) and another on purpose (A Yarn Story) and then treated ourselves to a well deserved cup of tea down the road at The Fig Store.

The Fig Store is a shop and cafe, with the shop selling plants, wooden things and metal things. We went in because the sign outside said they had a garden cafe and we fancied enjoying the sunshine a little bit more. It turned out to be a beautiful green sun-trap of a courtyard garden, with ample seating for the six of us. Tucked inside the building was a small cafe counter and we all ordered tea and cake. The monochrome aesthetic of the shop and cafe (and crockery) was mentioned by one of my companions as being particularly pleasing.

Unfortunately there was no rooibos tea and I ended up having camomile, but the banana loaf cake was excellent. It also had satisfyingly thin cups, which always makes the tea drinking experience better. Others enjoyed the Earl Grey tea, the peppermint and the English Breakfast and all said they were good.

When we first arrived there was no one else there and we wandered around the garden, taking photos and discussing the different shades and textures of the greenery. It felt like a hidden treat, especially as we happened upon it by chance. Definitely a cafe I will seek out next time I am in Bath.

Before we go any further, I would just like to say that this is the 100th review on this site. 100! We should all be very proud. I think it’s fitting that Sally Lunn’s is the 100th review as it is hundreds of years old. That’s a tenuous connection but it’s all I can think of. Let me know if you have a better one.

I would say that Sally Lunn’s is relatively famous for a tea room. It’s been around for hundreds of years and is famous for the type of bun that they serve, that Sally Lunn invented. It’s a cross between a bap and a brioche and tastes good. I have tasted the Sally Lunn bun before, when D very kindly bought me one last time we were in Bath. We didn’t have time to go in properly though.

This time my meeting finished with enough time for me to go and have lunch somewhere before I caught the train. I headed back to Sally Lunn’s to see if I could get a table. There was a queue which surprised me, but then I remembered it was half term, so not that surprising. The house is old and timbered and creaky with three floors, all with a room to eat in. I was on the top floor and it was full.

I was trying to be good and not eat cake for my lunch, which is what I usually do when I’m reviewing somewhere at lunchtime. It’s not as cheap as a cafe, so I picked a cheaper soup instead: tomato and basil. It was very good soup and the bun was good too. I could have done with more bun, but to be fair it does clearly state on the menu how much you would get with it so I should have just ordered extra. It’s a proper tea room, how do I know this? It had house blend tea and I was brought a pot of hot water without even asking.

Teapot? Yes, and the all important pot of hot water.
Leaf tea? Yes.
Milk jug? Yes.
Price? £1.68 for the tea, £4.58 for the soup.
Cake? Sally Lunn buns with cinnamon butter or chocolate butter or spreads etc, and cakes, and main meals.
Go again? Yes, I’d like to try a bun with something sweet on it.