Today I had my first cruffin. I’m a bit late to this trend as they’ve been around for a few years, but at least I’m all caught up now. I think this is the first portmanteau item I’ve tried (I’m discounting brunch as that’s not one particular thing).

Today’s cruffin came from The Cookie Jar and was a chocolate cruffin. Here are some photos for your delectation. 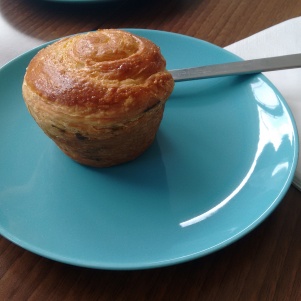 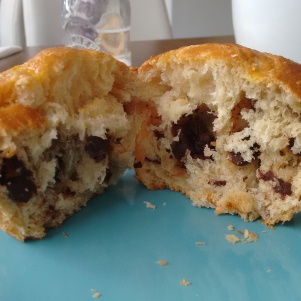 The inside of the chocolate cruffin.

The cruffin was heavier than I expected and quite filling (which I appreciated as I was hungry). My cruffin-eating companions shared one between two, I think they were already aware of the filling nature of the cruffin.

Overall, it was an enjoyable experience, and kudos to the Cookie Jar for going to the trouble of making them (apparently it takes three days and so they only sell them on a Saturday), but I’m afraid I would still choose a croissant or a muffin over a cruffin. Sorry cruffin. 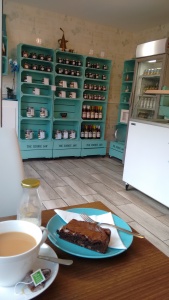 A view of The Cookie Jar from my table. 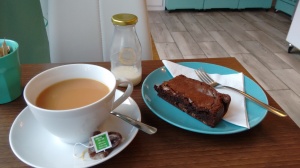 This photo is deceptive, because the brownie doesn’t look that big. I should have put a ruler up to the cup so you could see it’s a big cup, but that it was an even bigger chocolate brownie.

I know this is a blog about tea, but the most memorable thing about The Cookie Jar was the huge and very delicious slab of chocolate brownie. The rooibos tea was nice, but came in a cup rather than a pot and wasn’t loose leaf. I liked the cute little milk bottle and managed to retrieve the lid after I dropped it in my tea (my fault, not the fault of the milk bottle).

There aren’t that many tables in The Cookie Jar (three, I think?) and there’s no toilet. So it’s not a place to linger, but for a tasty sugar hit and a hot drink, it’s definitely the place to go.

My Tweets
Join 135 other followers