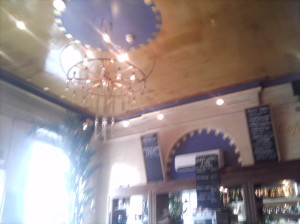 The ceiling of The Grand Café

This café looks as grand as it’s name, with pillars and gold outside and more pillars and gold inside. The Grand Café is on the site of the first coffee house in England and so I was a bit nervous about whether or not the tea would be any good, but I needn’t have worried.

I’m really sorry about the blurred quality of the photos, I hadn’t had any tea since before breakfast and obviously it was getting to me. There was a choice of black teas on the menu, including Earl Grey (which I had) and Lapsang Souchong (which R had). The tea pots came with no strainer but did have a mesh ball inside with the loose leaves in it. It was excellent Earl Grey and R says his Lapsang was also very good. 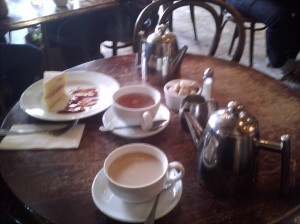 Tea and cake at The Grand Cafe

R also had a slice of Victoria Sponge cake and then decreed that I wasn’t allowed any, but in the interests of this blog I stole some with my teaspoon. It was good, not the best I’ve ever had, but better than most. It also came with some squiggles on the plate – either fruit coulis or syrup of some sort. Although he ate it, he could not tell me which it was, so this just proves the need for me to eat the cake when we go visiting places.