I know, I know, going to drink tea somewhere that calls itself a coffee company is bound to end in trouble, but I was with people who wanted to drink coffee. And that’s fine, I used to drink coffee too (just not as much as I drank tea). Plus, the whole reason we were in Ancoats in the first place was that H had mentioned how good the pizza was at Rudy’s Pizza was and I wanted to try it (it was very, very good).

H had heard about Ancoats Coffee Co. and how it had good coffee. So off we went. It’s in a converted mill, with seating inside and seating inside/outside – outside the coffee shop but underneath a glass roof, in what would have been a courtyard in the mill. 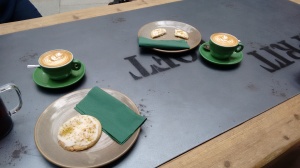 The cappuccinos and the biscuits.

We ordered our drinks: H had a decaf cappuccino (and wasn’t impressed when they charged an extra 50p for decaf without that being obviously listed on the menu or being warned about it first) and E had a normal cappuccino. I tried to have rooibos, but I think now rooibos tea has become so mainstream that Tetley sell it, it’s too mainstream for hipster Manchester – I couldn’t get rooibos in any of the places we went in during this visit. I ended up having red berry and hibiscus on the advice of the guy who served us. We also had two lavender and lemon biscuits – one for me and one for E and H to share.

The biscuit was delicious, sweet and light and with a lovely lemon icing. E and H said that their coffee was very good. My tea was, well, not really my cup of tea. It came in a tea pot, so that was good, but it also came with an empty carafe and a wine glass with honey on the inside. I don’t take sugar with my tea and wouldn’t have ordered a biscuit if I’d known that the tea would come with honey. Anyway, I tried it as it was. I quite like the idea of having the carafe to pour the tea into once the tea is strong enough, but the tea itself was quite bitter. You needed the honey to offset the bitterness. The issue with having the honey in the glass is that the first glass of tea is very sweet and the last glass of tea is not sweet at all. I didn’t finish it. It’s my own fault really, I know I don’t particularly like red berry style fruit teas, but I wanted a cup of tea.

Tea in the carafe, honey in the glass.

Tea in the glass and so the honey is in the tea too.