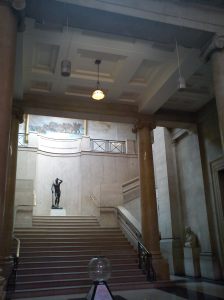 View from my table of the stairs leading to the ceramics gallery.

Museums and art galleries tend to have reasonable tea, so I headed to the National Museum Cardiff to have a look around and to seek out a pot of tea. I didn’t have long to spend in Cardiff so I decided just to look at one gallery and spent my time looking at the ceramics gallery. It was peaceful and interesting, with lots of information about how the ceramics trade had flourished in Wales and how it was influenced. I’d recommend going to have a look at it.

The cafe was directly below the ceramics gallery. I’m not sure if this was a deliberate ploy so it would tie in with the tea pots on display upstairs, but I liked it all the same. As it was in Wales there were more blackboards advertising the beverages and food available than usual – as it all had to be in Welsh and English. Lots of signage in Welsh cafes.

I had a pot of tea and two Welsh cakes. I think it might have been the first time I’ve eaten Welsh cakes whilst in Wales and they were lovely. For those that have never tried a Welsh cake, I can only explain it as being a cross between a scone and a drop scone, with currants (or are they raisins?). The staff were very friendly and helpful, even though the cafe was almost full to capacity and it was a light airy place to have a cup of tea. The musuem shop also had some nice stuff in it, including some tea related items.

Tea and Welsh cakes at the National Museum Cardiff.

Teapot? Yes.
Leaf tea? No, a Rosie Fairtrade teabag, which was okay.
Milk jug? Yes.
Price? £1.30 for tea, 65p per Welsh cake, or £2.40 for two Welsh cakes and a pot of tea (saving a grand total of 20p).
Cake? Yes, the usual suspects as well as cookies and sandwiches.
Go again? Yes, I’d like to have a proper look round the museum too.

Hatfield Forest was very relaxing, sunny and with ducks. I’d recommend a visit and a walk round the lake.

We had tea from the kiosk and sat on a bench in the sunshine. A good tea experience.

Teapot? No.
Leaf tea? Not sure, just came in the paper cup.
Milk jug? Yes, big one at the counter.
Price? £1.
Cake? Biscuits and brownie bites etc.
Go again? Yes.